5 Good Reasons To Change The Way You Run OCR Having discussions with many of the best athletes who run OCR, all are 100% in agreement with this.

I’ll give you 5 good reasons why you should consider changing the way you run, assuming that currently, like most runners, the way you run puts you at risk of injury and is limiting your performance.

1. Bad running form will hurt you, especially when you run OCR. Improper running gait is the number one cause of running-related injuries and the number of injuries among running athletes is astounding. There are more injuries directly related to running than any other causes in recreational sports. Statistics show that more than 65% of runners are either injured or have been injured, directly related to the WAY they run. A close second to this statistic is too much running volume. It makes sense that if you run poorly, too much of it will lead to a higher risk of injuries.

2. Heel striking is bad for your body and it slows you down. The baby boomers came up running in heavily heeled running shoes which actually promotes over striding and making ground contact heel first. This in of itself is one of the chief reasons why many runners are injured. Heel striking while running, diverts ground contact to your bony structures, which was principally why so many running shoe companies have built their marketing around cushioning the heel. Unfortunately, there are countless studies that prove that cushioning the heel does not reduce the potential for injury.

3. Over striding is the biggest mistake a runner can make. The two big no-no’s in running are as I pointed out are, over striding and heel striking. The further ahead of your body you reach with your foot, the higher in the air you must travel to transition your trailing leg to where you had reached with your leading leg, which causes you to bounce. The technical term for this outcome is vertical oscillation. Think of it… the higher you bounce, the harder you fall in stride. The University of Wisconsin did a study on running mechanics that revealed that a typical over striding runners stride frequency on average is about 164 steps per minute. They found that if a runner increases stride frequency by 5% the result is a decrease in injuries at the ankle knee and hip by as much as 20%. They further reported that by a 10% increase in stride frequency (which incidentally takes you to 180 strides per minute) injuries can be reduced by as much as 32%. What this tells us is that an increase in stride frequency brings ground contact closer to our bodies, reducing the bounce and has a greater likelihood of landing closer to the forefoot opposed to the heel.

4. Increase your cadence and reduce injuries. In all of this, gravitational force is what’s at work, either working for you or against you. A slower cadence keeps us on the ground longer than a quicker cadence. A quicker cadence minimizes bounce and reduces the impact force or what is termed ground force reaction. Having gravity as an ally rather than your enemy is a great place to start when you begin to have problems with your runs.

5. Making positive adjustments to the way you run will ultimately lead to better performances. If for no other reason than you’ll be able to run more often and for longer distances, because you are less likely to be injured.

I’ve said it so often, that I finally had shirts made with the tagline: “You can’t win if you run like sh#t”! In obstacle course racing, the winners are almost always those who run best. Certainly being able to run a clean race is important, but the time it takes to navigate obstacles pales in comparison to the time spent running the course.

I have had the great pleasure of traveling all over the country putting on clinics to help athletes correct the flaws in their running mechanics and provide clinical analysis of their working and resting metabolism. It’s so rewarding to hear time and again how by making the corrections I teach has made such a profound difference in reducing injuries and enhancing performance. In future blogs, I’ll touch on various elements of OCR performance running… the how and why’s. Richard “Coach” Diaz is often referred to as “the guy,” simply because it’s hard to encapsulate his many talents under one title. His experience and unparalleled diversity as a coach / clinician in endurance sport traces back nearly 40 years having conducted performance assessments for literally thousands of athletes from elite professionals to homemakers, is what defines him as the coach he is today. His focus is running mechanics and bioenergetics, which he believes are critical components of success in athletic performance.

His decision to dedicate his life’s work to the sport of Obstacle Course Racing quickly drew international recognition. Coach Diaz has traveled extensively all over the United States, putting on his highly acclaimed running clinics, turning mediocre athletes into elite competitors. His practice, Diaz Human Performance, is based in Southern California where he operates his “secret lab,” which many professional and recreational athletes regularly visit. You can find Richard Diaz on his website, Facebook, Instagram and on his popular podcast, The Natural Running Network. 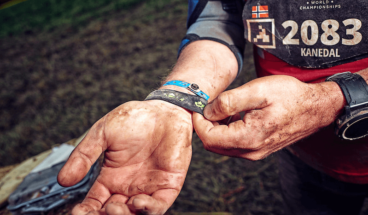 Obstacles/ Racing & Training
5 min read
Deciding to Give Up The Band at The OCRWC
So you’re stuck at an obstacle at the OCR World Championships, things aren’t going your well and you are thinking…
Read More Community/ Racing & Training
3 min read
Six Reasons to Run the Team Relay at the OCRWC
After pushing hard for the last couple of days doing the 100M Championships, 3K Championships and 15K Championships at the…
Read More
Need more info?
We’re here to help. Drop us a note and a team member will get back to you.
contact us
slatnt
News Signup
Stay up to date with OCR news, rankings, insider info and more.